What is the best broadband for gaming in NZ?

The best type of broadband for gamers is fibre, due to it’s very low ping, low jitter, and high data transfer rate.

When I think about all the years of gaming I’ve enjoyed (PC and Xbox mainly), a decent internet connection has been right at the core of my pastime.

Even going back to playing the earliest Battlefield games like BF 1942, and its ground-breaking mod Desert Combat from 2004, I remember having to painstakingly download the DC mod which was about 600 megabytes! Oh the horror! (Remember kids, this was 2004, so that was a lot back then!)

And of course, then we’d jump into NZ and AUS game servers to play BF1942 and DC, and be watching our ping to make sure we were going to be able to actually compete and get some leaderboard results!

Fast forward 16+ years, and while games are now routinely amazing, and online gaming has exploded in popularity, most of our requirements for a great internet connection remain - it’s got to be as fast as possible, with nice low latency.

Of course filesizes are dramatically higher, thanks to the ever-increasing resolutions, high fidelity voice acting and audio recordings, and overall complexity of the games we’re playing – and add to that that the fact that many of us no longer use optical media to buy our games, instead opting exclusively for digital downloads for convenience sake.

Not only that, but the sheer number of new games coming out every year is mind boggling – and they all need sizeable updates downloaded to keep them running well, or to add new DLC content and maps etc.

One of the most important factors if you’re going to be doing ANY online gaming, is making sure you have a low ping. If you have a high ping broadband connection to begin with, and then go connecting to AUS (or even further afield game servers in Asia / US / Europe) you’re going to be at a huge disadvantage when it comes to how competitive you can be in the game – we all know this.

It’s one of the things which can easily get overlooked however, when people are considering what broadband provider to go with – and end up getting wireless broadband.

Wireless broadband is known for it’s high ping unfortunately, due to using a cellular connection, so that is one to avoid when you’re getting an internet connection that you’ll be using for gaming.

In fact, ongoing kiwi household internet usage monitoring by SamKnows and the Commerce Commission shows that Fibre broadband has 2 – 5 times better latency on average than Wireless broadband, when connecting to a range of popular gaming servers – as shown in this graph in their Measuring Broadband winter report from August 2020 [source]. 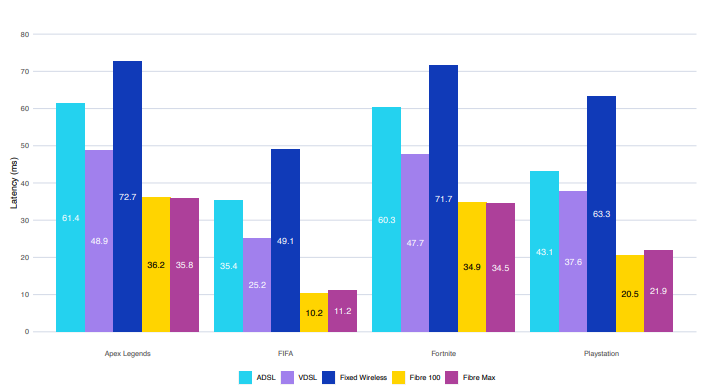 Copper based broadband such as VDSL and even the older and slower ADSL consistently outperform wireless broadband, but neither can match fibre.

Naturally the difference between Fibre 100 and Fibre Max (or Gigabit) is negligible when it comes to pings/latency, as it is primarily download and upload speeds which differ there.

So as we’ve covered, another extremely important aspect of a broadband connection that supports gaming is having a high download speed.

With each passing year, more gamers switch to digital downloads rather than buying physical games, and the size of the games and their updates continues to rise as game complexity and resolutions increase.

It’s been many years since I used an ADSL connection, but I can still remember the pain of the progress bars barely moving on a game download – or even worse, when getting home after a long day excited to play a round of Battlefield, and discovering a giant update needed to download… which would take until early morning to complete.

So if you have a Fibre Max connection, does that mean all your games will download at 1000Mbps?

No, definitely not – there are many variables at play, not the least of which is the capacity available to you from the game delivery server at that precise moment.

This is one of the core reasons we see our download rates on Xbox etc jump around a fair amount. Steam downloads for PC I’ve found usually go much faster, and more consistently – perhaps unsurprising if you look at how much capacity Steam have built into their infrastructure to cope with the eye-watering traffic levels they deal with every day from legions of avid gamers around world.

Even just looking at New Zealand Steam traffic as I write this, in the last 7 days kiwis have transferred 2.2 MILLION gigabytes of Steam data.

But even with variability in download speeds caused by the game distribution networks like Steam, Xbox and Playstation network, having bucketloads of spare speed capacity in your broadband connection is always a good thing.

It just means that you’re never the limiting factor really.

You can be downloading a massive game to your PC or console, while streaming a 4K film, and others in your household are watching youtube or on video calls – everyone using the net to do what they’re wanting, and you’ll still get that game roughly a bazillion times faster than I would have got that old Battlefield DC mod downloaded some years back!

Fibre 100 would be my minimum recommendation for gaming broadband – and Fibre Max is what I choose to go for, and is what I recommend to my friends. There’s just so much more headroom to download, upload and stream all the things at once 😊

When you’re thinking about broadband for gaming, it’s the low ping and high download speeds that definitely take centre stage – and rightly so.

But I wouldn’t completely forget about upload speed.

One of the most common ultra-fast broadband connection types in New Zealand is a Fibre 100 connection – which combines a 100Mbps download with a 20Mbps upload. These speeds in most peoples experience are very achievable and quite consistent.

Obviously in the vast majority of households this asymmetric broadband speed is not an issue, as most online activity revolves around consuming/streaming (downloading) content.

There will always be some smaller amount of upload that accompanies downloading, essentially part of the communication process – and then beyond that we have our cloud storage uploads of photos, the occasional youtube video upload, video calls that transmit our video/audio data out from our home and so on.

And so it is with gaming – our downloads of games and updates make up a disproportionate percentage of our broadband data usage when compared to data usage involved in online game play.

But if we WERE to find ourselves with extremely limited or unavailable upload bandwidth (perhaps a slower DSL connection with limited upload speeds available), then we’ll find our online gaming experience suffers bigtime.

If someone else in the household starts thrashing the uploads, leaving virtually no bandwidth for our game to be able to communicate back to the game server, our ping will go through the roof, and we’re likely to get fragged immediately as a result!

So again, Fibre 100 with it’s 20Mbps upload is really the minimum I’d recommend for a household that has some gamers in it (either in a family or flatting scenario), as it gives you enough headroom that it’s pretty unlikely that you’ll run into upload capacity issues.

If you’re wanting to just have ludicrous amounts of upload and download bandwidth, and to never have to even consider whether loads of simultaneous online activity is going to cause you issues, Fibre Max is what you want.

What about monthly data caps for gaming broadband?

Any gamer, myself included, will end up chugging through many hundreds of gigs of bandwidth each month, so I would immediately disregard any broadband plan that had a limited monthly data cap.

Just get unlimited, many providers offer unlimited plans (including Voyager of course 😊 )