Why is my internet so slow?

The most common reasons that can cause slow internet speeds are:

The good news is that broadband in New Zealand is easily in the best shape it’s ever been, and there are usually several things we are able to do to help make sure we are getting an awesome fast internet experience.

Let’s take a look in more detail about what these mean, and what we can do about them.

Router / modem needs to be rebooted

Consumer grade routers have a hard life these days - they’re far less expensive devices than enterprise grade equipment, but still have to cope with Gigabit connections, huge amounts of data being downloaded and streamed, high speed data transfer throughout our networks, and often dozens of wireless devices connected simultaneously.

For a variety of reasons sometimes after many months of being on 24/7, a router can grind to a halt, resulting in poor performance and much slower broadband speeds.

To rule this out, simply reboot your router (either from in it’s control panel interface, or using the Power button on the side or back of the device).

Give it a couple of minutes to start back up, and in many cases you’ll find that you’re back to blazing fast speeds.

Note: Just rebooting a router is different to Factory Resetting your router, which sometimes people try as a solution if they encounter connectivity issues. Rather than doing this, it’s usually best to contact your ISP’s support team to troubleshoot your connection issues first. 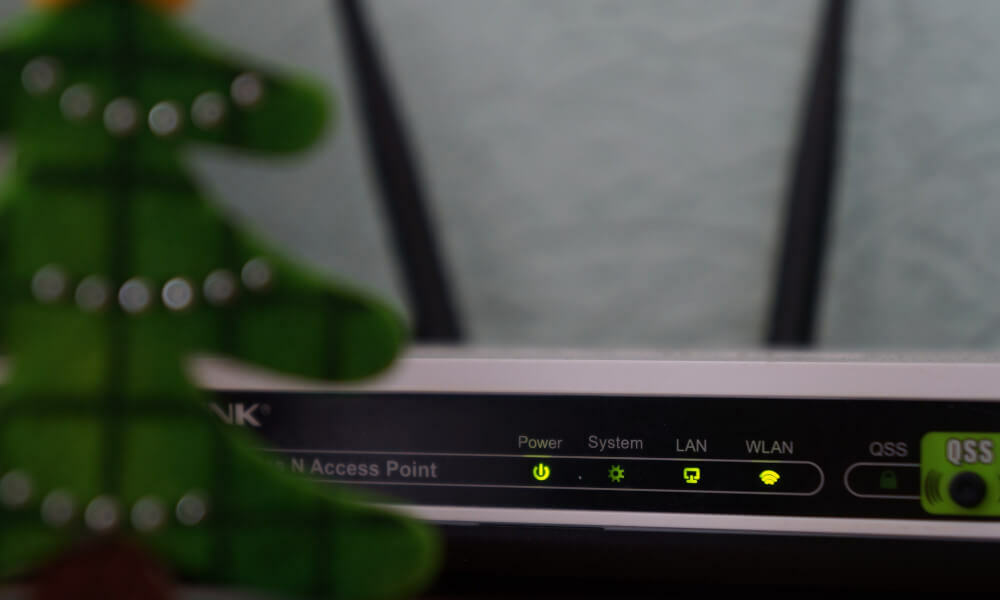 Slower broadband type (DSL instead of Fibre for example)

A huge number of New Zealand households are still on old slower types of broadband, despite having Fibre available at their address.

It only takes a moment to check your address for fibre broadband availability, and this is one of the single biggest things that can be done to drastically improve the speed of your internet.

Older copper phone-line based broadband such as ADSL and VDSL can be passable, but they’re nowhere near the speeds possible over a fast Fibre connection.

Here’s a comparison chart of the potential download speeds of ADSL, VDSL, Fibre 100 (100/20), and Fibre Max (950/450). Note that while VDSL can get up to 70 (and in rare cases even higher), in practice most people are located too far away from the infrastructure to support that in the real world - one of the main limitations of copper phone line based broadband, which doesn’t impact Fibre. 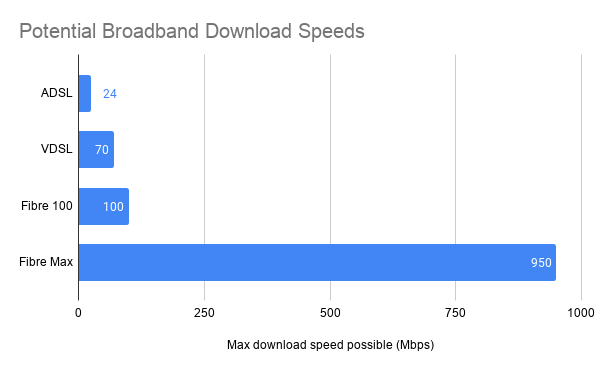 While basically everyone uses WIFI for at least some of their devices, many folks are confused about exactly what all the WiFi standards (802.11g, 802.11n, 802.11ac etc) mean.

Essentially, some of the older standards (2003 and earlier) provided 2.4Ghz wireless, and could only go up to 54Mbps in a perfect situation. Newer standards have introduced 5Ghz wireless, which is less congested and supports much faster speeds.

Most modern WiFi routers that people have purchased themselves, or receive from their internet provider will support fast 5Ghz WiFi (and many also include the older 2.4Ghz as well in case the customer has older laptops or phones that don’t support 5Ghz).

So next we have to think about where we are going to put our WiFi router (or other access point). Ideally, it needs to be somewhere central in your home, so that it still has good signal strength in all your rooms.

If you have your router at one end of your home, you may find that you have poor speeds at the other end of the house. This is especially true if you have a large home.

Likewise if you have the signal basically needing to get through multiple large electrical appliances such as heatpumps, fridges, microwaves and so on, that it likely to likely to cause significant interference with your WiFi signal.

If you have numerous neighbours in close proximity (such as high density housing like apartment blocks), you can also run into issues with dozens of overlapping WiFi signals causing congestion, and consequently slowing down your wireless internet speeds.

To solve this you can try switching to 5Ghz if you’re not already using that. You can also try changing WiFi channels - though normally routers will try and find the best possible channel automatically.

If all else fails you might be best to look at getting a mesh WiFi system such as Google WiFi or similar, which usually will involve placing 3 small WiFi units around your home. All of these units can communicate with each other, and to your router - and the end result is that this provides amazing WiFi in every room of the house. Wiring issues in the property

This is far less common when running Fibre broadband, but if you’re still using ADSL (or VDSL) it is possible that dodgy phone wiring in your home is causing significant noise on the line, which in turn dramatically slows a DSL connection’s possible speeds.

These wiring issues could be due to the age of the cabling, degradation or damage over the years, rodent damage, water leaks - you name it.

If you suspect this could be an issue, usually your best bet is to get an electrician in to go through the cabling in your property, and potentially replace with new CAT6 cable, and put in a new dedicated wall jack for your connection.

Likewise if you are still running an old copper phone line (on the same copper as your DSL broadband) it may be that they need to install a splitter which could be missing or malfunctioning - this should prevent interference from the phone service impacting the broadband speed and stability.

Fibre connections of course don’t have really any of these issues, as it is brand new fibre optic cable being run into your property from the street, directly to an ONT. From there a new ethernet cable is connected from the ONT to your router, and you’re up and running at full speed.

Most home networks are pretty straight forward setups, usually consisting of an ONT or Jackpoint where the broadband connection is terminated, and a single router/modem.

However there are definitely situations that can arise where perhaps an old router or two are being used in the network to try and add more ethernet ports, or provide an additional WiFi access point - which if misconfigured (or limited by the specifications of older hardware) can cause extremely slow network transfers, or artificially limit the speed of your internet connection.

An example of this would be running an older router with your Gigabit Fibre connection (which should be able to get up to 950 Mbps download). Some older or under-powered routers can handle only 100 Mbps - which could leave you wondering why on earth you’re unable to see the amazing speeds you were hoping for!

If you suspect this could be the case, try googling your specific router make and model and check it’s specifications - or just talk to your internet providers support team to clarify if that is what is happening for you.

Large number of simultaneous uploads/downloads on your connection

Take a moment and think about how many devices you have in your home that are connected to the internet - it’s likely to be far more than you think!

All of our desktop computers, laptops, phones, tablets, streaming devices like Apple TV, Roku, Chromecasts, IP security cameras, VOIP phones, game consoles - they all require use of your internet connection, and most will be uploading/downloading updates, content, backups without any input from you or the other people in your home.

Then on top of that, most households will have numerous people actively browsing, downloading, streaming, uploading for several hours a day.

All of this internet activity on older ADSL connections especially would usually mean slow downs for the other people in the household some of the time.

Thankfully the faster Fibre broadband connections (especially Fibre Max!) are rarely going to be impacted by all of this background activity, or the usage of a single individual - as they just have so much more capacity than an older copper broadband connection has.

But it is definitely something to consider - and something you’ll want to rule out if you’re ever trying to run a speed test (make sure you switch off WiFi, and that you’re the only one plugged into your router when running your speed test for the most accurate result).

Old computer or smartphone being used

Most of us are upgrading our computers or smartphones reasonably often (whether or not we can afford it!) but there are still a large number of older or lower spec computers and phones in use out there.

One thing to keep in mind is that these much older (or cheaper) devices will often struggle to handle not only having several applications running at once, but also the large amounts of data able to be streamed or downloaded onto them.

If you have a newer device that you’re able to test the connection with to rule this out, it’s always a good idea - at least then you’ll know the constraints of the device you’re using.

On older or low-spec devices there’s unfortunately not much that can be done to improve the performance of them in many cases, other than perhaps ensuring that you don’t have multiple applications running at one time, or downloading/updating in the background for instance.